The Irish left is still reeling from defeat in the Euro-austerity referendum on 31st May, and preparing itself for the next assault by the government. Some united left supporters claim they did not expect to defeat the government, while others, including our correspondent, Brendan Young, thought it was just possible – and that everything would depend on voter turnout.

Ireland’s 60:40 vote in favour of the EU Fiscal Stability Treaty was worse than expectations based on the likelihood that a significant number of those who have refused to register or pay the household tax (approx. 50% of households) would vote No – as indicated by opinion poll findings.

An exact breakdown of the vote according to area is not available, but we do have indicative data. In one working class area of Dublin, there was a 90% No vote, but on only an 18% turnout. By contrast, in a predominantly middle class area there was a 70% Yes vote, on a 65% turnout.

There was also a clear urban : rural divide, with rural areas voting ‘yes’ in significant majorities – despite evident poverty and low wages in rural areas and small towns.

For the left, the referendum campaign was hard going and fragmented – groups on the left tended to do their own thing as priority, giving united-front work secondary consideration. The invaluable initiative that was the United Left Alliance is rather staggering along as a result – always the same issues, with the left groups continuing to operate in their old ways, unable to see the collective strength in unity. That, of all, is the most disheartening, and why the Europeans, in Greece, Spain, and France provide some comfort and encouragement.

For Irish voters, the fear-factor of exclusion from future bailout funding, generated by the three main parties in government and opposition, the EU, the business organizations and their civil-society supporters, the main farming organizations, all outweighed the arguments of the No campaigners. Although four trade unions came out for a No, they failed to campaign. Meanwhile, the trade union federation ICTU, although not calling for a Yes, allowed their members to be pressured by the Yes campaigns. 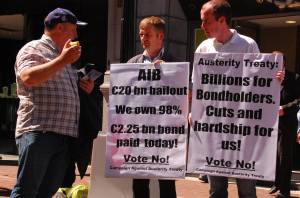 Many Yes voters did so reluctantly and unhappily. This was reflected in a complete lack of triumphalism by the government and its supporters: they are aware that they did not win the argument; and that many voted out of fear, rather than commitment. And the 40% No vote – predominantly working class – is a denial to the Labour Party of a mandate from its supporters to implement austerity measures.

The next stage will be the resistance to steps by the government to impose the household tax, and following that, the water tax. There are reports that at the end of June the government will begin to send letters demanding payment, but we have no evidence of that yet.

Over the past week the media has pre-occupied with a tax scandal of one of the members of parliament who has campaigned for non-payment of the household tax. This should blow over in the coming weeks but it is damaging and divisive for the anti-austerity campaigns.

But the absence of the promised ‘stability’ that was supposed to come after the austerity treaty referendum has not been lost on many people. This will impact upon the electorate when the next referendum comes – and it is already being said that Merkel’s ‘closer fiscal union’ will require yet another referendum in Ireland, although the recent successful question gave worrying scope to Irish governments to proceed without further public reference.The yes vote empowered the state to “ratify the treaty on stability co-ordination and governance in the economic and monetary union, done in Brussels on March 2nd, 2012. No provision in this Constitution invalidates laws enacted, acts done or measures adopted by the State that are necessitated by the obligations of the State under that treaty or prevents laws enacted, acts done or measures adopted by bodies competent under that treaty from having the force of law in the State”.

So the struggle will continue – both day-to-day and in any future referendum.

And a post-script on Greece…

The Greek election result is perhaps the best that could have happened. If Syriza was sincere in carrying through its promises of not implementing the EU-IMF austerity program, they would have to begin local self-organization – with neighborhood and workplace committees beginning to take over the running of the state, exercising control of the activities of the banks, etc. Syriza is not yet in a position to do that. But they can now begin to build that kind of network, based on their mass support, through organizing resistance to the austerity that will be imposed by New Democracy. It remains to be seen if they will – but the opportunity is now there for them. The KKE (Greek Communist Party) will also be examining the results, and the impact on their support of their refusal to participate in united front activity with Syriza. Interesting times!