As the Welsh Labour Party gathers for its annual conference in Cardiff this weekend, the question is asked “Why, for goodness sake, does anyone support Labour?” Gordon Gibson reckons that the Welsh Party should top up its supplies of ‘clear red water’. 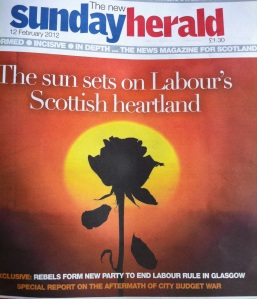 Visiting my mother in Scotland last week I was rather shaken by two events. Five years ago, Labour had 69 out of 79 seats on Glasgow council. Last week they wheeled out the infirm to secure a majority of 2 for their budget. With defections, deselections and disaffection galore, Scotland’s rock-solid bastion of Labour is now a hung council. On May 3rd, there is every likelihood that Glasgow will go SNP.

It came up in conversation when I met up with former flatmates and friends I hadn’t seen for decades, a not overtly political lot. Declaring my hand, I told them of Labour’s support in Wales. In disbelieving, unrehearsed unison they replied. “Why, for goodness sake?”

In Scotland, the drift away from Labour is frightening. The party appears hell-bent on retaining its New Labour character by, for example, raising Alastair Darling from the ashes to call for unity with Tories and LibDems to preserve the Union, and by having little political strategy other than to slag off the SNP. Unfortunately for Labour, the SNP, being the populist party it is and led by a very shrewd political operator in Alex Salmond, is saying all the things that people want to hear, things that Labour should be saying.

Scottish people, whose under-rated political traditions expressed themselves over the years with overwhelming social democratic and communist representation, don’t take kindly to Labour’s new leader, Johann Lamont, like her predecessor, shrugging off the dissent in her own back yard, and joining the tribalism. The Scots don’t have a problem with the SNP if it is standing up to the Tories. And it is. They, the Scots, will consider independence and its implications in due course. They know, as one wag said, that there are more pandas in Scotland than Tory MPs, and that it is the Westminster Tories, jobs and cuts that are the issue for now. All they hear from Labour, both in Westminster and Holyrood, is, at best, a confusing message about the economy, debt and necessary cuts, wrapped up in anti-SNP rhetoric and tosh about ‘the Union’. As in Glasgow, the only outcome will be to drive voters into the haven of the SNP, and so towards independence.

In Scotland, during the Blair years and before the unforgivable Sheridan debacle, Scots had begun to see an alternative to New Labour in the likes of the Scottish Socialist Party. After the 2003 elections, the SSP had 6 MSPs – an extraordinary achievement for an avowedly left socialist party. Sheridan’s antics put paid to that, but the die was cast. Voters and, even more important, young people were looking for alternatives. Salmond and the SNP, never friends of socialism, were happy to provide the rhetoric and, wisely, no small gains and resistance to the Tories. Although always a home for disaffected Labourites, the SNP was, hitherto, not a party of left nationalism; it was always much messier. It’s another story now.

In Wales. Labour holds on to a fragile support, with a different back-cloth. The mainstream left divides itself into two camps: disaffected left socialists form a strong current in Plaid Cymru, finding expression in Leanne Wood, running as favourite to win next month’s leadership election. If she does, it is bound to shake up both Plaid and Labour. Plaid has matured from a traditionally ‘Welsh language nationalist’ party, with worrying pro-fascist elements in its history, currently being re-assessed by their leading left ideologue and former MP, Adam Price. Labour, on the other hand is tending to regress into a old-style male apparatus that finds ‘the national question’, not to mention ‘campaigning trade union resistance’, rather awkward.

Labour took its leftism into government after the devolution vote of 1997 and even drew Plaid into the ‘One Wales’ coalition from 2007-11. First Minister Rhodri Morgan, Welsh leader for most of 10 years from 2000, had described that leftism as ‘clear red water’ between Wales and Blair’s Westminster, as early as 2002.

Make no mistake, the achievements of devolution are not to be scoffed at. Morgan’s cabinet in 2000 was the first in the western world to have a majority of women ministers. Their constitution put sustainablity and equality above all else. Sure Start, focused on child poverty, was embraced, developed and is now protected in Wales. The Assembly was first with free travel for older and disabled people back in 2002, first with free prescriptions in 2007, first with a strategic planning policy in 2004; Scotland came first with subsidised student fees back in 2000, Wales came on board to underwrite against the Tory fee increases last year. And you can be sure that the NHS is a lot safer in Welsh and Scottish hands than it is in the Tories’.

Conference this weekend will test Welsh Labour’s mettle. New leader, Carwyn Jones, has no mean task on his hands. Ed Miliband’s trials and tribulations are analysed most generously as ‘biding his time’ while he endeavours to change the course of the entrenched, unaccountable apparatus and parliamentary party of Blair’s legacy. Carwyn dances, perhaps not quite with Rhodri’s aplomb, on tightropes of slashed budgets and Tory defiance, that still ambiguous leadership from London, and a burgeoning independence debate at odds, for Labour, with our experience of devolution – and all whilst onlooking Labour’s danse macabre, and the SNP’s jig, in Scotland.

The priorities remain to do all we can to protect jobs and services, seeking new and innovative ways to boost the Welsh economy, pursuing the green agenda, building resistance to the Tories. These themes form the core of Welsh Labour Grassroots conference fringe meeting on Saturday evening, 18th February, 6.00 pm at the Welsh Institute of Sport, Sophia Gardens, Cardiff CF11 9SW, with Lesley Griffiths AM (Welsh Health Minister); Mark Drakeford AM (Cardiff West); Siobhan Corria (Llandaff North council candidate); and Martin Mayer (Unite the Union and Labour party NECs).

That discussion is sharpened by the Plaid contest, where these same themes, laced with independence, are the essence of Leanne Wood’s bid for leadership. She is quite clear that she sees no circumstances for alliances with the Tories. That’s about jobs and cuts and a future for Wales, not just the Union. Labour take heed.